After removal of the BGA from the PCB the removal site must be dressed or prepared for the attachment of the replacement BGA. If the balls are eutectic alloy soldered to both the part and the PCB, some of the ball will likely remain on the PCB after part removal. The remaining solder may be nonuniform in both composition and volume. The volume varies due to how the molten solder separates between the ball and the BGA pad surface. This operation entails removing all the solder balls and removing all of the solder residue. Only then can the site be dressed.

The dressing of the pads can be done by one of several methods. The methods for solder removal include the solder wick or solder vacuum techniques. The solder vacuum process has less chance of damaging the pads while being somewhat slow. The solder wicking technique, while faster, can lead to lifted pads or otherwise damaged solder mask areas if not done using the proper care/technique with the right size of wick.

After solder removal from the pads of the BGA site cleaning is performed.   Cleaning parameters would follow those used in the initial assembly of the product.

Solder must be selectively applied to the BGA site pads in order to attach the solder balls of the BGA to the PCB. Solder paste is preferred as it provides a "tacking" functionality for the device being placed. In addition, it provides compensation for height differentials while overcoming warpage of the PCB or the component. Generally speaking it provides for a wider process window.  Numerous studies have also concluded that the application of solder paste in BGA rework is critical in obtaining a highly reliable product. There are several methods which can be used to apply solder paste selectively to the prthepared rework location. 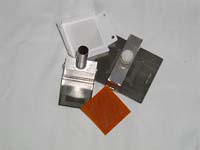 There are numerous methods for selectively applying solder paste to the BGA rework pad locations. The most common stenciling methods include the use of metal stencils, flexible removable stencils as well as stay in place stencils. Each of these methods has distinct advantages over the other and is a function of lead time requirements, cost, operator skill level as well as  other factors.

BGA lands on the PCB. This method provides the advantage of printing solder paste where placing a stencil on the board would be impossible due to space considerations. 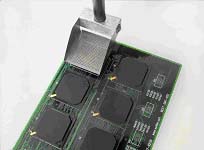 Metal Rework Stencils A robust easier to get right process for deposition of solder paste is the use of flexible solder paste stencils. These stencils are laser cut from a polymer film with a residue-free adhesive backing that allows for easy removal. The first step to using the flexible stencil is to remove the release liner to expose the adhesive backing. The stencil must then be manually aligned with the land patterns on the PCB and firmly pressed down in place on the PCB surface. A squeegee is then used to roll a bead of solder paste across and down through the apertures of the stencil. The stencil is then carefully removed from the PCB surface. There is no cleaning step as the stencil is disposable.

An alternative method of stenciling solder paste on the PCB is to use a stencil that remains in place on the site location and becomes an integral component of the PCB. The stencil material is a polyimide film with a high temperature adhesive covered with a paper backing. This material combination has been used on PCBs for many years in the form of bar code labels and Kapton(TM) tape.  Like the removable stencil, the -permanent stencil is laser cut and can be provided in a number of different configurations. When using the semi-permanent stencil, the paper backing material is removed exposing the high temperature adhesive. The stencil is then manually aligned with the land patterns on the PCB and pressed into place. Again a squeegee is used to roll a bead of solder paste across and down through the apertures of the stencil. At this point the paste application process is complete and the device is reflowed. The stencil is not removed from the PCB and therefore no stencil cleaning step is required 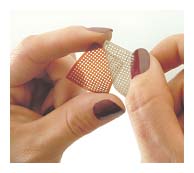