Thermal profiling is required for several operations in the BGA rework process including device removal and reflow. Each specific BGA site to be reworked must have a BGA rework profile developed individually as each site has variations which affect the reflow process including the location of adjacent components, heat-sinking variations of the PCB internal layers and the thermal mass of the component itself. By creating a BGA rework profile for each location the risk of over or under heat exposure to components, lifted pads, damaged solder mask as well as improperly soldered joints is minimized.

There are several methods available to correctly identify and build a BGA rework profile. The method used is a function of the availability of a sample or test BGA rework profile PCB and component to be reworked. One method assumes that a profile PCB and part is available in order to establish the BGA rework profile, while another assumes that no dedicated profile PCB exists. Whatever the method used, it is critical to record the BGA solder joint, the top of the component and corner temperatures on the BGA package. Floating air thermocouples or thermocouples attached next to the part being reworked are NOT accurate solder temperature indicators rather a temperature probe installed inside a solder ball to be reflowed is the most sure method for determining the proper reflow temperature for each BGA location. When a profile board is made available thermocouples can be embedded into the component die being reworked as well as neighboring solder joints which may be damaged if they are over the liquidus temperature. Temeperatures of heat sensitive components such as plastic connectors, glass diodes or cameras may need to be monitored so as not to be damaged by the rework process. 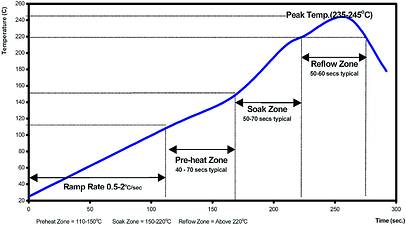 PROFILING WITHOUT A DEDICATED PROFILE PCB

In this method it is critical to measure the temperature under the center of the BGA to be reworked. Insulated thermocouples are pushed underneath the center of the BGA to approximate joint temperatures in order to formulate the best BGA rework profile. It has been shown that thermocouple readings are affected by hot air nozzles of rework stations if they are placed near the outside rows of the of the solder joints. Thus the center BGA solder joints, which tend to be lower in temperature than the outside rows, need to be measured. In this technique the BGA rework profile is established during the removal process.

In both profiling methods there are several BGA or other locations which should be monitored:

BGA rework profiling is accomplished with a thermal profiler. The temperature probes are connected to the controller and then the data is pulled out via a PC. The data can be graphed and the analysis and iterative profile adjustments followed by measurements "dial in" the profile.