One of the keys to insuring a proper reflow profile is getting to and maintaining the proper preheat temperature. This is accomplished with a PCB preheater which heats the board to between 75º and 125º C prior to the application of directed heat to the part area requiring rework. In some cases higher end equipment featuring multiple pre-heating zones will minimize the chances of part or board warpage. In some cases very large formate BGA rework systems are required in order to minimize warpage when there is  large surface area. This part of the rework process is a critical  as when as it minimizes PCB warpage during component removal while at the same time limiting the thermal shock to the PCB. The maximum temperature is determined by the thermal characterisitics and materials used in the construction of the PCB. In order to maintain the integrity of the PCB laminate the maximum preheat temperature is set approximately 10ºC or below the Tg (glass transition temperature) of the PCB material. Higher thermal preheat temperatures minimize the potential thermal distortion and shock to the PCB during the reflow process.

BGAs should be handled in ESD safe work areas in order to prevent damage to sensitive components from electrostatic discharges. These areas must be designed and maintained to prevent ESD damage.

Proper Handling and Storage of ESD Sensitive Devices and PCBs

The following practices should be adhered to when working with BGA components and PCB assemblies:

PCBs should be handled at properly designated work areas only. 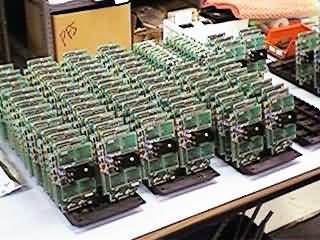 Designated ESD safe work areas must be checked periodically to ensure their continued safety from ESD. The areas should be monitored for the following:

All moisture sensitive devices should be handled as per IPC/JEDEC J-STD-020A and IPC JEDEC J-STD-033 standards.

Areas near the area array device being reworked require their temperature to be controlled and limited to less than 150ºC or to the manufacturer's specifications paying special attention to "heat sensitive" devices such as connectors, components with a plastic housing or similar lower melt temperature components. Other components such as crystals, cameras and glass diodes will also need to be protected from too high a heat source during the BGA removal process. Heat shielding may be required in some cases to prevent component damage. Other methods may need to be employed in order to prevent underfills from "squirting out" solder, conformal coatings may need to be first removed so they do not push solder joints around during reflow and mirrored BGA locations may need to be protected from higher temperatures to minimize the impact in the reworked area.